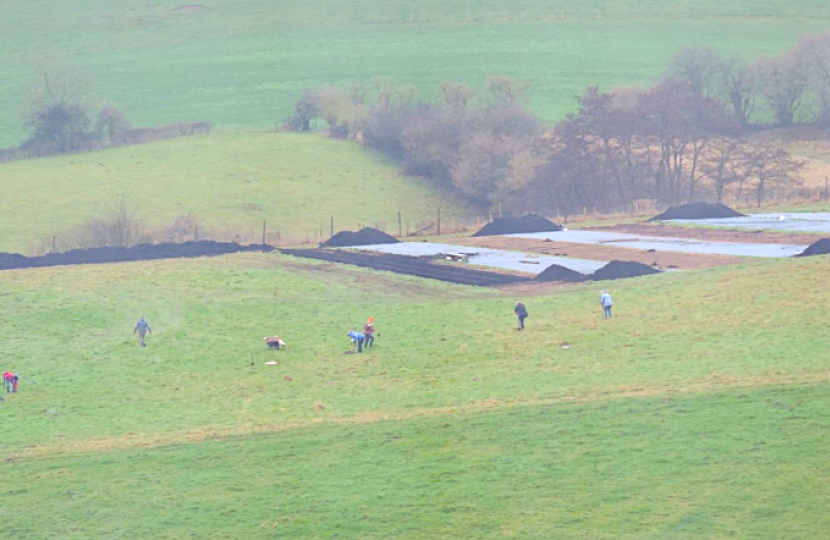 Weston Conservative campaigners, Graham Pristo and Martin Grixoni, have raised concerns about the way permission was given for the new market garden development at Weston Spring Farm, on the border of Weston village, in the west of Bath.

This is their statement:

“We’ve been asked about us referring to Weston Spring Farm in our latest leaflet.

“Hamish of Middle Growers, who are developing Weston Spring Farm has complained on Facebook about some of the attacks on the development. He is right: it’s not acceptable that anyone should be harassed or abused, especially when entrepreneurially trying to start a new business and operating within permissions granted by the relevant authorities.  It is a great shame so much local bitterness has erupted.  The reason is, many local people are unhappy and concerned that proper rules and regulations may have been bent or avoided, if not actually broken, to enable the development.

“If so, that would hardly be Hamish’s fault: he and his colleagues were actively encouraged to make the application by their Bathavon North councilors; they received permission to develop the site, although not under standard planning procedures. The serious questions that have been raised refer to the conduct of the councillors in lobbying planning officers to make decisions which their boss wrote were “against national guidance”.

“There is clearly some substance to the concerns being raised with us by residents. The land being developed is in a valley classified as an Area of Outstanding Natural Beauty (AONB), sits in the Green Belt and in a World Heritage Setting. It’s in a very sensitive location on the Cotswold escarpment, in close proximity to the Cotswold Way National Trail and is visible for miles.

“BANES has a statutory duty to conserve and enhance the natural beauty of the national landscape, to preserve sensitive areas for future generations and not to allow developments that would spoil the visual amenity enjoyed by walkers and residents alike.  These are important duties.  Significantly, no new builds have been allowed in this valley for decades.

“Several people have also raised with us issues with the small local road leading to the site which is one vehicle wide, has no lighting and no pavement, but is regularly used by walkers and horse riders.  Despite this, large vehicles (some 31 tonnes when loaded) have been delivering to site.

“Only recently a large van vehicle became stuck.  Residents are concerned that inadequate attention was given to the poor access arrangements, unsuitable for an operation of this size, when planning permission was granted.  However, the BANES Highways team were not, it seems, consulted due to the particular method used to gain permission.

“The valley is home to a small number of families, many of whom tell us they did not know about the proposal, which was kept away from full planning committee.   Their views and concern too deserve attention.

“We’d like to take up Hamish’s generous offer to visit the site and find out more.  Much better to talk, play by the rules, and try to reach some sort of acceptable compromise, that avoids dispute and bitterness.  We will report back.”

Help us by volunteering or joining as a member: more details via the link at the top of this page.