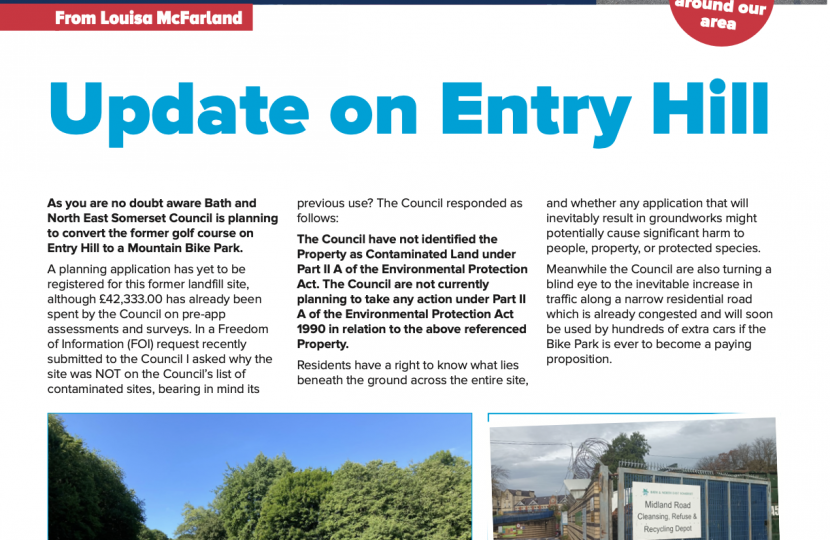 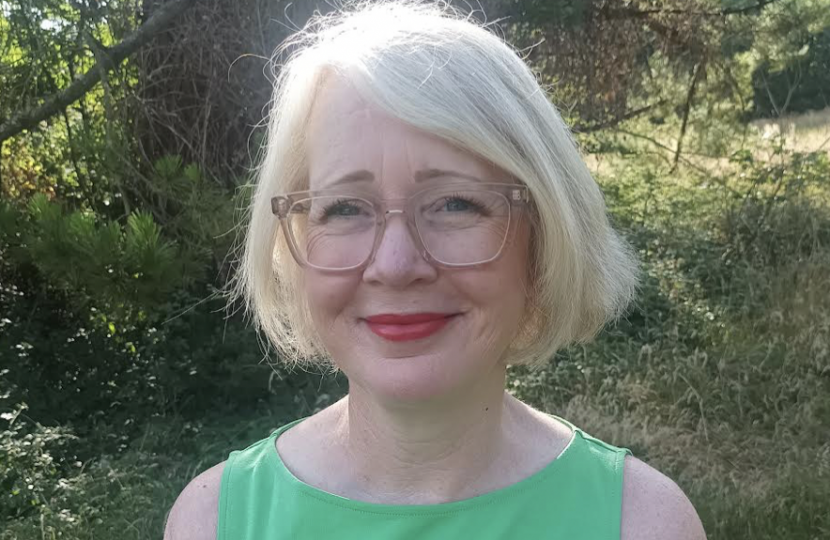 Bath Conservatives are celebrating after LibDem BANES Council announced it was abandoning plans to turn the Entry Hill parkland into an inner city mountain bike park.

Local campaigner Louisa McFarland and her team have delivered thousands of leaflets, asked Freedom of Information questions, and written letters to the Bath Chronicle highlighting the flaws in the proposal.

STATEMENT FROM WIDCOMBE & LYNCOMBE CONSERVATIVE CAMPAIGNER LOUISA MCFARLAND ON THE ANNOUNCEMENT BY BANES COUNCIL THAT IT IS ABANDONING ITS PLAN TO BUILD A COMMERCIAL CYCLING PARK ON ENTRY HILL:

“Bath and North East Somerset (BANES) Council has today, 1 December 2022, announced that it will not be putting in a planning application for the former landfill site at Entry Hill, despite having already spent £42,333 on pre-app assessments and surveys.

“This represents a grudging admission of mismanagement and failure on the part of BANES, which had engaged in a sham consultation exercise before proceeding to ignore the concerns of local residents. By contrast, this is a significant victory for those residents who have campaigned tirelessly to prevent this deeply flawed proposal from ever going ahead.

“The Council cites a 20% increase in supply costs as the reason for not proceeding with the proposal. It had already been drawn to the attention of the Council on many occasions that the viability of the proposal was fatally flawed, not least because of the lack of funding from the Council’s preferred bidder, Pedal Progression.

“Add to this the fact that the site is former landfill with the numerous attendant issues that have been revealed by the Phase I Contaminated Land Desk Study.

“Residents still haven’t seen the Phase 11 Contaminated Land Study and will be pushing for this to be released to the public in order to inform any future proposals.

“Residents have a right to know what lies beneath the ground across the entire site, and whether any application that will inevitably result in groundworks might potentially cause significant harm to people, property, or protected species. The residents are keen to find a suitable, viable alternative for the site, but the Phase 11 Study must form a vital component of any subsequent plans, otherwise this money that has already been spent would be completely wasted. We now call upon the Council to release this document without delay. There has already been too much time and taxpayers’ money spent on this fruitless exercise.

“Local Conservative campaigners will continue to support residents by listening to their concerns and facilitating the best possible use of this wonderful urban green space.”