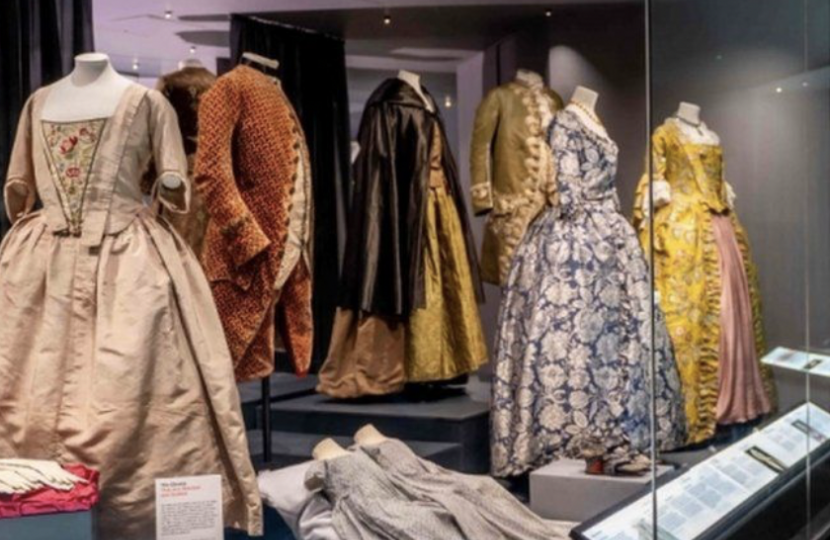 Bath’s local Conservatives have accused the LibDem Council administration in BANES of failing to value and understand the city’s Fashion Museum collection of historic costume and contemporary fashion.  The collection now faces having no new home after the Council's bid for a £20 million government grant to fund a new building failed to win approval.

The collection, made up of historically significant garments from the past 200 years, is recognised as an important costume collection. Created from donations from benefactors over several decades, the collection belongs to the city and citizens of Bath and is officially owned by the Council.  It was housed in the Assembly Room in Bath, but the lease of the space it occupied was ended by the National Trust, the Assembly Room owner, last year.

The Council has made no provision for a new home for the Museum, and the collection is understood to be in storage in the Glove Museum in Westbury, Wiltshire.  The public do not have access to the collection, and there are no plans for a temporary home or for any of the items to be put on display until a new permanent home is found.

The Council announced last year that it would be converting the old Bath Post office building in the city centre as the Museum’s new home, as part of a proposed £37million plan, which remains largely unfunded: the project was based on the Council succeeding in being granted a £20 million grant from the government's ‘levelling up’ fund.  It was announced this week that BANES had been unsuccessful.

“While remaining in BANES ownership, the collection needs to be freed from the Council and put in the hands of specialists from the fashion, art, media and design worlds.  It deserves people overseeing it who can bring their expertise, verve and clout and can leverage their network of industry contacts to make the most of what is, in global terms, a relatively modest but still internationally recognised collection.

“Bath needs to work to its strengths as a perfect example of a historic gem of a city and a well-known architectural masterpiece.  Following the current interest in Bath resulting from the city being an increasingly popular backdrop for film and television, the Fashion Museum offers an important facet of our heritage for visitors to see.  Look at the excellent at the Holburne Museum as an example of this.

“With imagination and creativity this collection, donated to the people of Bath, can be used to attract visitors, and bring new energy to the city.  What is required is entrepreneurial flair and creative business sense.”

The Conservatives say that if they are elected to run the Council in May’s local elections, they will seek outside national and international experts to act as trustees for a new Fashion Museum charity, create a Patrons group, involve the private sector and identify ways to generate income and buzz for the city from the valuable collection.