Bath Conservatives have chosen a new Parliamentary candidate in anticipation of a future General Election, and he’s a former Bath resident.

Matthew Heappey, Business Development Director at Close Brothers Asset Management, lived in Bathampton after graduating from Newcastle University, and now has a home in Tetbury with his wife Becky, and their young daughter, Milly.

Matthew’s brother is the MP for Wells, James Heappey, and he was very involved in helping deliver winning campaigns there against a strong LibDem challenge in 2015, 2017 and 2019.

“Bath is being let down by poor representation both locally and in Westminster,” said Matthew.

“I look forward to being the voice Bath needs, putting the City – and the people who live here – ahead of party politics, as I work with the Government to deliver for Bath residents.

“Bath has many issues here which need tackling, such as transport and accessibility, housing availability, inward investment, and the relationship with the Universities.

“I will be first and foremost a campaigning, energetic advocate for this wonderful City.”

Matthew’s title is officially Parliamentary spokesperson, pending boundary changes expected next year which will see the Bath constituency grow to include part of North-East Somerset.  At that point a Parliamentary candidate will be formally appointed for the new seat. 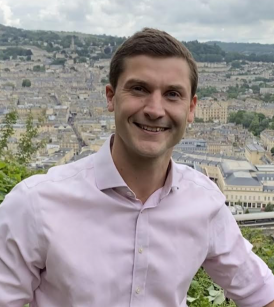